A couple of times in the last little while strangers on Facebook have emailed me asking to be my friend and whether I was at a science camp or other school related event back in the dim, dark ages of, say... 2003.
I am very flattered to be asked because, well, let's just say I finished my high schooling more than 10 years before that.
Then I briefly contemplate updating my photo.
Current profile photo: about 2005 (no flash. I like photos taken with no flash and nice, soft light) 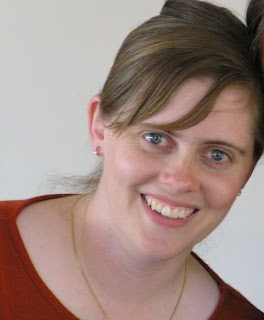 This image was taken only 10 days ago. It may be a contender, although it does use a flash. 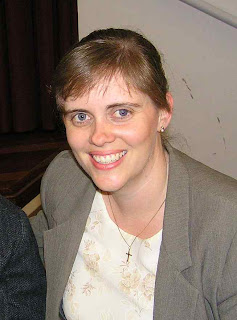 In remarkable synchronicity I was seeking out some old college photos (by the way, fellow collegiates, our alma mater turns 40 next year and they are looking for copies of the formal college photos for 1987, 1988, 1992 and 1993 - so give them a call if you have one of these) and I noticed that I probably don't have to update my image because there are some things in life that never change.
Exhibit A - 1997 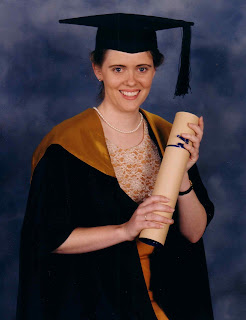 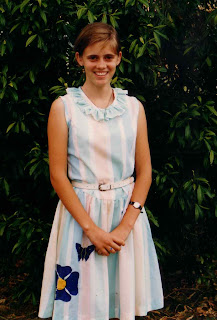 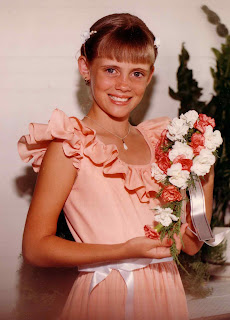 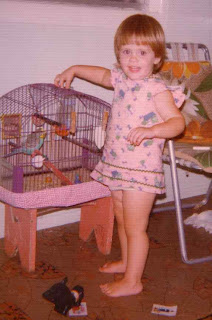 Chance that there will be a significant difference in what I look like in the near forseeable future?
... Approximately None.
Posted by Hippomanic Jen

you are so cute!! love the retro photos!

Those cheekbones! I'm soooo jealous. I do have cheekbones - otherwise my face would cave in - but they're not visible to the naked eye.

You're gorgeous. Did your mum make the dress from 1976? I think our mums shared patterns...

Ah! Now my secret is out. Yes, I am on Facebook. Obviously not just now, because just right now I am blogging, but yes, I exist there.

Couldn't avoid the retro photos because that happens to be the era when I was little. Lovely aged appearance that I carefully applied to the photos, hey?

Femina, would you like some cheekbones? I like them normally, and will be glad of them when I'm 80 - but when I laugh uproarously my face goes entirely to cheekbones and squished-up eyes. I don't like those photos, so none of them exist here.

It is entirely possible that my Mum made the dress from 1976. I will have to ask her to comment. Are we twins again?

We could be twins except I would have been wearing the dress in 1973 or so, assuming you're about 2 in that photo. Ah, and with rick-rack (ric-rac?) around the hem. I had so many dresses with that sown on the hem. Hmmm... are you wearing the same earrings in every photo?

It IS possible to be on Facebook and Blogger at the same time. Just open another tab in your browser. I do it all the time. That may be an indication that I need to get a life, actually...

You haven't changed much at all over the years - you have the most beautiful big blue eyes!... and I am with Femina, I would kill for those cheekbones!! ... I have to laugh though, was there a girl in the eighties that didn't wear apricot taffeta, I still secretly yearn to wear dresses like that, they were so pretty and feminine!
You look gorgeous in it (go the
80's bridesmaids.... yay!!)

You are so lucky that your pic still looks classy though and you didn't follow the "big hair" trend, Unfortunately whenever my kids see pics of me in the eighties all they do is ask, "why did you have your hair like.. sooo big" I am saying to them, 'hey, look at me, at how hot I was back in the day...' (they call it when mum and dad lived in the dreamtime LOL!) I am wanting them to go "yayyy mum, you were so hot", and all I get is "but your hair....."

You, Jen, on the other hand had perfect ageless hair! Hair that will look great whether you are showing it in the 90's, the many years of the 2000's, (I think they call them the noughties), and probably for years to come!! Perfect eyes, Perfect teeth and Perfect hair, and by the look of that photo, perfect figure - All that and an ability to make people laugh - you were the "IT" girl at school weren't you!! lolo......Geez I am yapping!!

Great Post Jen, I really love the vintage photos, they take me back to when I was young..

...hmm I will finish this book now!!
Hope you had a wonderful easter, God Bless
Hugs and smiles Jen xo

You can give me the cheekbones, mine are under chipmunk cheeks. :( You are so gorgeous, what great photos.

You can give me the cheekbones, mine are under chipmunk cheeks. :( You are so gorgeous, what great photos.

Femina - they aren't the same earings in every photo... as a matter of fact I didn't have my ears pierced in 1976! But they were a graduation present from my parents, and now I have noticed that the final three photos I am wearing the same earings. Caught out big time!

Jenny - I LOVED that apricot dress, which was actually a polished cotton, not taffeta. It was beautiful and lined (with taffeta) and had a long 'swirly skirt' which was the summit of my ambition for most of my childhood.

I spent most of the eighties (particularly late 80s) plaiting up my hair when it was wet to try to get it curly, and eventually had to admit I will never have big hair. I was never the IT girl at school. You see, my hair was too straight for me to be gorgeous in the 80s.

These days I am very, very thankful. And the upside is that now I often have people comment on how long I must spend straightening my hair EVERY SINGLE TIME I WASH IT. He, he, he.

Wendy - I am probably a little thinner than I was in 2005, not much, but you should know that you are now one of my favourite people in the world. 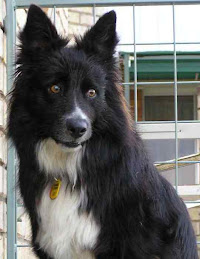